← Conscious of Stone
What Happened to Good Intentions ? →

Worried mother and concerned environmentalist meets modern technology. I called my pediatrician about constipation issues with one of my children. We were concerned about the long-term impact of unusual bowel-related experiences in our family. Am I being delicate enough for the average reader ? We had this inexplicable problem. One of our family’s members tended to clog the only toilet in our home and sometimes at motel rooms as well (at least one can usually find an alternative location in a moment of crisis at a motel !!). This usually happened late at night and so not convenient at all. Even though this sweet child in good humor once likened the situation of our toilet to a hazardous waste site with appropriate signage, he was likely traumatized at least a bit in knowing this was not a happy circumstance for the entire family. Eventually, though the child was not complaining, the family had enough experiences to not want to experience them any more. What to do ?

Being a basically natural kind of person, I tried prune juice but having to saturate it with table sugar along with a chaser of sugar water on the side just didn’t seem like a healthy long-term solution to me and though it seemed to help the circumstances somewhat, it was still a battle that none of us enjoyed. So that strategy was abandoned once the bottle of juice was empty months ago. But the problem persisted. Then, I discovered Wellments Baby Move which is concentrated prune juice with prebiotics. My finicky eater would not need to swallow as much volume and I wouldn’t have to entice him with a spoonful of table sugar anymore. The only complication was the dosing was for infants, babies 6 mos to 1 yr and 1 year and older. My son is a decade older than 1 yr but I tried that dose anyway. And still we had no real improvement in our circumstances. Finally we all just simply needed the relief of a real solution.

So, I called my pediatrician who didn’t seem impressed by my natural efforts and I had to admit they weren’t solving our problem entirely. I should mention that my son does eat a high fiber (Mini-Wheat Little Bites) breakfast with Whole Milk and whole grain pasta with Flax Oil at dinner with another cup of Whole Milk before bedtime. So even though he doesn’t do vegetables (unless you count Organic Corn Tortilla Chips as a vegetable) and infrequently eats fruits (though sometimes an Apple or Strawberries), his diet didn’t seem to me to be the source of our problem. The pediatrician said to pick up some over the counter MiraLAX and enforce regular visits to the restroom after every meal so that we could “reset” his biological cues (which only meant twice a day for my child because the rest of his eating is more like snacking). Her advice about establishing a new habit did make sense to me.

Our business deals by volume primarily in recycled polyethylene plastic. Imagine my worried mother shock to read the “active” ingredient on the MiraLAX bottle – Polyethylene Glycol 3350. We’re going to feed him plastic ? Not a warm and fuzzy feeling. Though we have researched polyethylene for toxicity when customers wanted to use it as building blocks or pieces in a children’s museum and in these solid forms the material is inert and non-toxic.

When I mixed up the first dose of MiraLAX, I was surprised that plastic could simply dissolve in water. (And a word of warning from my experience to other parents, if your child gets diarrhea when your doctor prescribes a full dose as defined by the bottle cap, give the child a 24 hour break and cut the dose in half because it is a possible sign of an overdose). Having previously written about the problem of plastic microbeads in the planet’s water supply for this blog, a thought arose that I should learn more about polyethylene glycol to determine if this material is a form of microbead. Polyethylene glycol is an osmotic laxative which works by retaining water in the stool, resulting in softer stools and more frequent bowel movements. And polyethylene glycol does not affect glucose and electrolytes in the body.

There are a lot of uses for polyethylene glycol – Carbowax in industrial use, as a surfactant, as a dispersing agent and as a laxative including the prep needed to have a colonoscopy. When attached to various protein medications, polyethylene glycol allows a slowed clearance of the carried protein from the blood. This makes for a longer-acting medicinal effect and reduces toxicity, and allows longer dosing intervals. Examples include PEG-interferon alpha, which is used to treat hepatitis C. It shows promise in spinal injuries, treating tumors, some cancers and nerve repair. One very interesting use was in preserving objects that have been salvaged from underwater by replacing water in wooden objects and making the wood more dimensionally stable. It also prevents warping or shrinking of wood when it dries, including green wood.

I learned a LOT about the many valuable uses of polyethylene glycol but it took an article about toothpaste at “Dental Buzz – A Jolt of Current: Trends, Innovations, and quirks of dentistry” to get an “answer”. The author, Trish Walraven, was concerned about polyethylene microbeads in Crest Toothpaste and says “We’re not talking about polyethylene glycol, which is soluble in water. This stuff won’t dissolve in water, or even acetone or alcohol for that matter. How do I know it won’t dissolve? Because I put on my little scientist hat and tested it.” Okay, so at least it isn’t part of that environmental problem !! And the MiraLAX is working for us, we have blessedly free flowing plumbing without an incident for weeks now. Yay !! 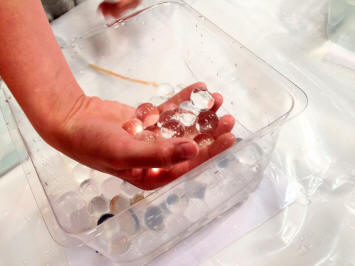 I remember these little plastic spheres that my boys have had fun playing with affectionately calling them “iggys”. These tiny, 3mm solid spheres quickly become approximately 20mm balls as they swell up in water. They shrink back to their original size when dried out. You can’t even see them in a container of water. While these water beads absorb a lot of water, they yet maintain their spherical shape when they are fully “grown”. They teach a lesson about the power of a class of polymers called Hydrogels. OK, so these don’t dissolve in water (due to a physical or chemical crosslinkage of the hydrophilic polymer chains) which makes them are an entirely different kind of plastic. Common ingredients in Hydrogels include polyvinyl alcohol, sodium polyacrylate, acrylate polymers and copolymers and thankfully “natural” hydrogel materials are being investigated for use in tissue engineering.

It is best not to throw the baby of possible benefits out with the bathwater of scary chemistry that many environmentalists including my self worry about. There can be better living in part through good chemistry. Actually, as a moderate and thoughtful person in addition to being a worrying mom and a concerned environmentalist – I believe that the careful and wise application of science is very important to modern life.

“Crest toothpaste embeds plastic in our gums” by Trish Walraven posted in Dental Buzz – A Jolt of Current: Trends, Innovations, and quirks of dentistry on March 4, 2014 – http://www.dentalbuzz.com/2014/03/04/crest-imbeds-plastic-in-our-gums/

“Hydrogels” posted under “Gel” at the Wikipedia – http://en.wikipedia.org/wiki/Gel#Hydrogels

3 Comments on “Better Living Through Chemistry ?”